Over the last few years, quite a large number of new distilleries have been founded. One of the is Spirit of Yorkshire in England.

Different rule apply to whisk(e)y around the work; in England, spirit can only be called whisky once it has been aged in an oak barrel for three years. The Spirit of Yorkshire’s first casked distillate has now reached that milestone and can now be called whiskey:

Drum roll please! 3 years ago today, we filled our first cask, so our maturing malt can now be called whisky! We won't be bottling straight away as we need to build stocks, but it won't be long. Sign up to be first to know when we do https://t.co/EUW7pBJP66 #Yorkshirewhisky #SOY pic.twitter.com/1XUzDY61kQ

I have visited that distillery, but don’t have a review posted as I only started doing reviews after touring this distillery. Memory says it was a good tour; the fact I have a bottle of their maturing malt backs this up, as I only buy a bottle if I’ve had a good tour: 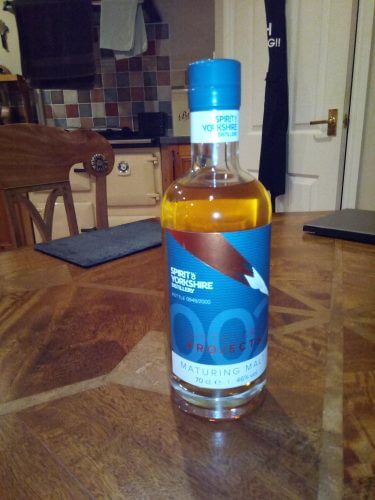 I’m also very, very pleased to report that they have a strong bottle as I accidentally dropped this bottle on the terracotta-tiled floor in the kitchen prior to taking the photo. Thankfully, it survived intact and undamaged.